Where do top Pálava Hills makers like Volařík, Gala, and Nepraš & Co. find their base? Certainly not in the Communist cooperative of yesteryear. Yes, they look towards France or Germany, but they don’t bring in soil from those places. No, they root down and find themselves in Pálava’s soil and some of the personal traditions of winemakers who created a little bit of their product for “home use.” Many of these winemakers still practice their craft to varying degrees of success.

From these tiny makers, shambling through their underground sklepy and above ground boudy, one can hear and see the distant past, a dusty past of song and sunshine. But what one can taste… I hope that wasn’t the past!   In my experience, for every decent wine, there’s a bland one, and for every really good wine there are 3 bad wines.   Regardless, the Pálava Hills would not be the same without these “old hands,” men who made wine with the limited resources of the Communist years, and who now “make enough for themselves and friends.” A simplicity and purity remains with these vintners; and regardless of the greater quality of the next generation’s winemakers, nothing quite beats knocking on a door and being invited into a maker’s home.

A digression – Not in the Pálava Hills, but in the nearby region of Slovacko, a friend once took me to a bouda – an above ground wine cottage on a dark November evening. The maker welcomed us into a cold space with enough room to hold four or five people – an old, old wooden wine press took up most of the space. On the press was a date from 1948, the day a Moravia politician died after imprisonment by the Communists. The previous owner wrote it there as a memorial for his friend, and the current winemaker re-chalks the mark every few years.

The man was unassuming, quiet. He spoke of the history of his bouda, and the region. Sitting in his presence as he served us wine, it seemed he and we were the ephemeral ones, nearly intangible shades compared with the history and the wines he served.

The wines! They were unique. I’ve never experienced wines quite like them since. Simple, lots of white flowers. Nothing too complex but the taste after I swallowed went on for minutes.  Three, four minutes and more – an epoch compared with most wines. This lingering softness of tree blossoms – a quietness, just like their maker, I’ll never forget them…

I won’t forget the wine impresario Petr Očenášek’s uncle either. Admittedly, more for his character than the strength of his wines. The wines aren’t all world class, but they are truly his. And Josef Král is a good man, with a great wit. So I’ll enjoy his drinks too!

Visiting “Uncle Jožka” in the town of Březí, near the base of the Ořechová Hora, Očenášek and I meet him as he cleans a homemade fermenting vat. It’s well-constructed, a nice, even bead on the weld. We descend from the tiled main room to his long arched space covered in blackening red brick. Good moisture for wine storage makes mold grow, and this not unhealthy in itself. Blacker still are the outside of the barrels, dark and smooth. I ask him if they are painted. No, they naturally become that way – after all they’ve been there since World War II! But he cleans them out every year and deep cleans them every five or ten years.

Král (The name means “King”), at 70-years-old, has had skirmishes with the wine authorities. They have told him that if he made his wine more like his neighbor he could have it ranked under the appellation system of Mikulov. But he doesn’t want that, he likes his wines as they are.

His broad hand grabs a wine-thief, a bulbous, glass container with a long straw at one end to siphon off wine; he sticks it into a white and inhales. Yellow liquid bubbles up into the bulb; he puts his thumb on one end of the thief, raises the device above our outstretched glasses, releases his thumb and out burbles the drink.

We can smell sulfur, among the fruit and floral notes,  probably some chemical processes occurred without enough oxygen. Očenášek tells him.   Uncle shrugs.

I ask him if Petr is a good nephew. “He talks a lot.” “I told Petr once he got into the wine business he wouldn’t drink our wines… and look he’s here. He tells me about every of my wine [sic]; there’s nothing wrong with my wine.” 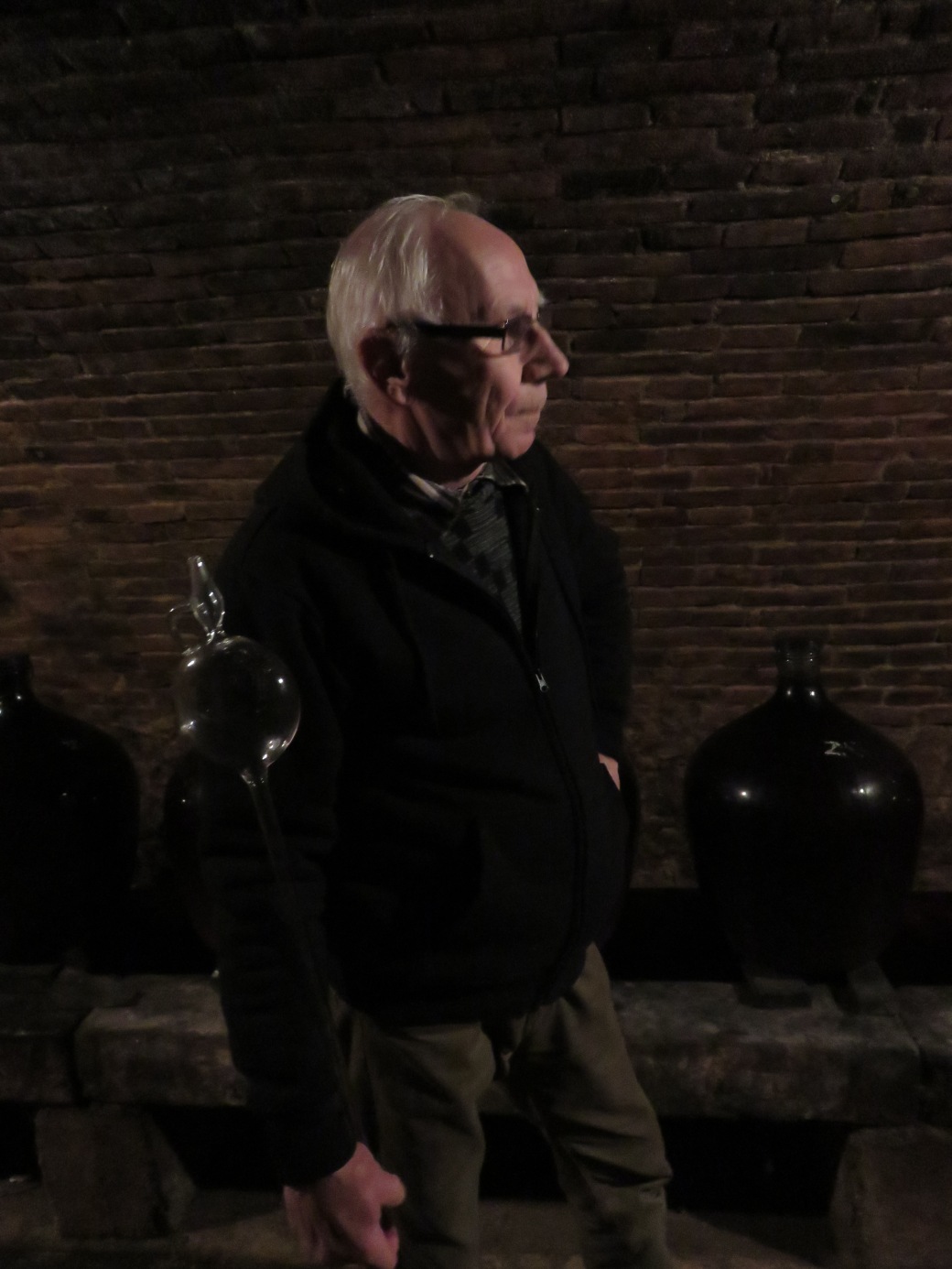 Jozef Král – Hail to the King.

Očenášek, the former bodybuilder, is smaller here, the curious boy still thrilled to enter the wine cellar. The boy’s very smart now, knows too much for his own good, but his adoration for his uncle is obvious and probably hasn’t changed a bit.

We get to the red wines, and a small demijohn holds some from the variety André – he has a few vines behind the house.

We try a Svatovavřincké ( St. Laurent). True to form it is fruity and tannic, carrying a rustic charm; I ask what he thought of the Svato this year. “This question is sporný, [controversial]. The wine was clear on St. Martin’s day November (11). That’s my answer.” I think this means it fermented normally and finished normally by mid-November.

A Cab Sav is from grapes that he would usually let hang a month longer, but this year, “Starlings had specialized in my vineyards.” So a little less ripe.

There is a refreshing, matter-of-factness in our conversation. Uncle Jožka isn’t going to change – who must he impress? At most, his friends. He didn’t have a particular wine, his Zweigeltrebe (Zweigelt) last year, so he bought some from his neighbor (the appellation-approved neighbor) to sell to his friends so they wouldn’t be sad. They came, tried it, told him, “This isn’t yours. We want your Zweigeltrebe.” Friends who help him pick his Zweigeltrebe grapes get the wine for 30 koroun (a litre) instead of 35. His vines are at the base of a hill, and pickers have to carry the full baskets up to a vehicle waiting on the access road. This is the economy one deals with here. The wine is cheap, but the friendships are priceless.

The uncle has a few vines from the Ořechová Hora vineyard. Petr enjoys it: “Super!”

“Finally he says something nice…”

He asks me if I want to return to any of the wines – they’re all 2015 vintage, by the way – new and done and just enough to last the year.. I return to the Svatovavřincké – fresh red berries and coarse – a proper country wine.

I am being polite about the wines, but delighted, and enjoying every moment of this experience. Uncle seems to sense this. He goes over to the shelves at the far end of the cave and picks out a dusty bottle covered in hairs of mold, his last bottle of Zweigeltrebe from 2006. “For later, so you’ll have something good.” I couldn’t not share it with him, and we come to an agreement: We’ll open it now so he can experience it too, and then Očenášek and I will drink it with dinner. The cork pops and a rush of blackberries and raspberries and strawberries and fruit and fruit and fruit pour into our glasses. A happy wine, happy like old crooked voices singing a favorite song until they become young again.

I’m warm, even in this chilly cave. It’s not from the alcohol; I’m driving and have spit every single sample. The hospitality and familial atmosphere has inured me from the cold. As Petr and I leave, Uncle Jožka offers me an apple from his neighbors’ tree. We step out into the late-fall air, get into the car and drive away leaving the grand figure waving behind us. A little frost has appeared on the windshield, and I feel the rush of time roll in again.